“Australian entities paid nearly $4 billion to foreign companies or entities [in 2013] and received $748 million from foreign entities in charges for the use of IP. Australia is therefore operating in an environment where the value of IP imports exceeds IP exports and is therefore running what can be considered a consistent IP trade deficit. As such, there is further room to improve for Australian businesses when it comes to generating innovative outputs that can provide a source of revenue, not only for business but also for the national economy.” 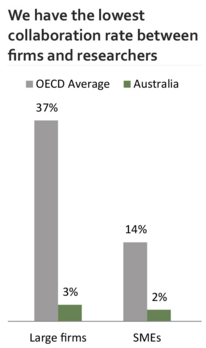